The round that has taken the personal defense world by storm: the G2 Research Radically Invasive Projectile (R.I.P.). 9mm R.I.P. Ammo capitalizes on copper's ability to be very finely machined to make a bullet that, upon impact, performs unlike any other hollow point available today. The RIP bullet features a unique one hundred percent copper, petaled-trocar design which gives it the ability to not only penetrate deep into a target but also fragment in fluid. This iconic bullet design has just enough rounding on the trocars to feed and cycle well in modern pistols. Upon entering a gel, fluid, or other soft target the petals break from the base and create 9 individual wound channels as the base continues on course. This penetration and separation delivers not only a maximum shock wave but wound path as well.

When it comes to the G2 RIP ammo, there is not another round out there that performs in such a fashion to dump all potential energy into the target without over penetrating, which is the goal of any self-defense round: protect yourself and your family without causing collateral damage.

Check out the video review of G2 Research R.I.P. Ammo below!

Cases may be nickel-plated brass.

This is loaded ammunition.

Hello my friends, this is FPSRussia and as you can see we are going to do some science today. So I got the G2 RIP ammo in 9 millimeter. So this is self defense ammunition, it’s a 96 grain solid copper projectile and the idea is that it’s going to release all of its energy into the target, not going to pass through and it creates lots of wound channels. You’ll be able to see from the close up what these rounds look like. They look really scary. I’ve got some ballistics gel here and I’ve got our Kriss Sphinx here. So this is made by Kriss, the same company that makes the Kriss Super V.  We’ll take this, and we’ll take this and we’re going to see what it does to this ballistics gel here.

OK, so we’re going to fire a round into the ballistics gel, see just how much penetration we get and also how each segment of the round separates and makes its own wound channel.

So that looked pretty good. Let’s go down there and see how it worked out. Alright so that is pretty damn impressive I’ve got to admit. This is 16 inches of ballistics gel, this simulates human flesh. You can see, the center part of the round penetrated the entire block and just kept on going, and then in this area there is a four-and-a-half-inch channel wound, all the way around in three dimension. A circle here, of just, copper going in every direction. That’s a pretty nasty round. I was a bit skeptical to begin with but I think I am kind of sold now. This is a very deadly self defense round.

OK, so you have seen what this ammunition can do to ballistics gel. Let’s see what it will do to a few chickens.

Let’s head down there and see what we did. Ok so that actually went much better than I thought it would so, it went through this chicken, through this chicken, into this chicken, back out this side, then into this little baby chicken. And if you look very closely right here, that’s the back of the projectile. So I think in the slow motion you can actually see this punch through. So all of those tiny pieces of the round expanded, made different wound channels in every direction but the base of the bullet kept going, penetrated through this many, four chickens, this much chicken. So I’m actually pretty impressed by that. Let me show you one more thing.

Ok so one last thing, everyone knows that this ammunition comes in 9 millimeter but they recently came out with 380 automatic, they sent me the first batch, we’re going to see what our little tiny LCP can do with this RIP ammunition.

Absolute devastation coming out of this tiny little pistol. I’m not sure about self defense ammunition, it’s one of those things that people go back and forth on, but I think this ammunition has definitely proven that it works, it cycles and the results are pretty impressive. So you be the judge but if you want to learn some more about the ammo find their website there is a link down below. I hope you guys enjoyed the video, and as always, have a nice day.

G2 Research made big waves in the personal defense world when it released its Radically Invasive Projectile (R.I.P.) in the major pistol calibers.  The R.I.P. utilized a solid copper fragmenting hollow point design to cause massive trauma in the first 12" of penetration.  More recently, G2 Research has applied their R.I.P. concept to their "Rip Out" and "Trident" rifle rounds as well as their Civic Duty pistol ammo.

I was totally impressed with the R.I.P. ammo. When a person needs a self-defense ammo; R.I.P. more than fills the need. I recommend R.I.P. for the informed shooter who wants to protect their person and family.

A little expensive, but I have to admit, I love it. Some of the best defense ammo around. My purchase was easy and it arrived within a few days. Very happy customer that will definitely return for more if my local dealer runs out again.

I shot these rounds in a ruger P94DOA and I was very impressed. Not the type of rounds to blow away on target practice but the rounds I did use really held a tight pattern. Lots of projectiles from one round.

R.I.P. last word in self defence

Accuracy, time after time, and dependable every time you pull the trigger. If you want to make sure your families are safe, buy this product. If you only have time to discharge your weapon one time, this is your round. J. Marin

The rounds were ordered due to the gel penetration represented in the video.
The ballistic performance presents a formidable stopping power the trocar bullet and scattered penetration that a single round can produce: double tap would definitely cause multiple organ failure that no human anatomy could survive. The round ballistic's are nothing short of impressive. Being in the medical field and seeing knife, entry and exit wounds plus combat mutilations; this round for personal protection fills potential scenario's with crushing power.

These Ammo are great!!

I love em I keep 15 in the clip with me at all times. Purchased rounds for self defense conceal carry, for my Beretta 92 fs. Shoots perfect no issues 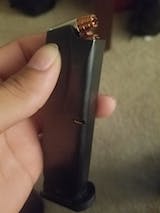 Though I haven't used them yet, I bought them just for home intrusion defence. And should someone be brazen and stupid enough to force their way into my home, I wanted ammo that would cause the most damage possible. This ammo fit the bill perfectly! It's like shooting 9 bullets at once! You can't beat that this side of a shotgun or AK47!

I purchased the R.I.P for my Taurus 24/7 G2 9 mm. The check out and arrival time was simple and fast. The performance of this ammo is at the top of my list. The damage it causes to the targets surpasses that of the hollow point or any critical defense ammo I have used. I will definitely keep all this ammo in all my handguns.

Haven't shot the Ammo. But I know it will perform. You guys did excellent on everything.

We bought this ammunition after conducting extensive research with G2, the FBI ballistics specialists and several other agencies.
We were pleased to discover that the RIP 9 is by far the most profound self defense ammunition available on the market today.
The ammunition is lightweight and out performs any ammunition we have purchased prior.

Hope i never have the need for which I purchased this. It looks painful

Amazing. No malfunctions. Really cool to look at before and after.

Been in law enforcement for over forty years. Excellent ammunition

I am very happy with the 9mm RIP rounds. The function as advertised. I highly recommend these rounds for self defense.

No FTF or FTE, Loaded like silk in my XDM -9, Groups consistently, And does exactly what it was designed to do. Between Underwood and the G-2, I found my full time carry loads.

Purchased this product for home defense in my Springfield XD 9mm and CZ 75b 9mm. Hopefully we will never have to use it for that purpose. I will definitely be purchasing more in the near future.

If I use it on a person breaking in my house ,instead of calling 911 , I would have to call a cleaning dept.

They are pricy but what is my life worth. I don't want to kill anyone, but if there is a home invasion.
You could shoot 2 blank and then 2 slugs and then the rest RIP. And make some hamburger.
Should help in court having the blanks.

The 9mm rds performed excellent through both of my guns. I was hesitant at first of the design of the nose of the bullet but had no problems with the feed. The ordering was quick and easy and shipping was quick even with a major blizzard in the NE. Will def purchase more rds.

Just received this ammo and loaded my carry guns and home defense. Have not fire it yer, but saw the video of it in gel, I have no doubt it will be deadly effective.,

at this time I have only fired two rounds.Was curious what kind of penetration it would cause...very happy the rest are for home protection! Retired law enforcement officer. Best 9mm shredders I have seen!

Little too expensive for what you get itExpensive. for the price they should at least give you 50 rounds

The round that has taken the personal defense world by storm: the G2 Research Radically Invasive Projectile (R.I.P.). .45 ACP R.I.P. Ammo capitalizes on copper's ability to be very finely machined to make a bullet that, upon impact, performs unlike any other hollow point available today. The RIP bullet features a unique one hundred percent copp...

The 9mm +P ARX® is a revolutionary bullet in every sense of the word. From the way it’s manufactured, to its shape, to the way it transfers energy to the target. The non-expanding ARX is injection-molded from a specially blended polymer-copper matrix that is designed to be tough enough for an all-purpose defense round. Upon entering soft tis...

Lehigh Defense .380 Auto Xtreme Penetrator Ammunition is the latest in their long line of premium personal defense and hunting rounds.  Featuring a 100% solid copper construction and patent-pending  CNC designed projectile. Xtreme Penetrators are  among  the best personal defense rounds on the market. This Lehigh ammo is a round that cycles inc...